If you’re feeling that itch of spring construction hit, you may be starting to think through your needed power tools this year like Rotorazer. Or, maybe you were up late watching infomercials while you waited for your spouse to get home from a night out, and you saw some tools that piqued your interest.

If you saw an ad for the Rotorazer Saw, you’re probably curious about whether or not it really does all that it promises.

The Rotorazer saw is a high-powered, light-weight miniature hand saw, made by Ideal Living, based out of Van Nuys, California. It is small, and handheld, which makes it super versatile for using in unusual places, and for quick cutting jobs.

The makers claim that the it combines the abilities of seven saws:

Basically, you’ll never need a different kind of saw again, according to the makers of the Rotorazer. It comes in a couple of different models, including the standard version, and Platinum version Saw.

What Does the Rotorazer Do?

The makers of Rotorazer claim that it is a versatile saw that will allow you to cut through any kind of material, on any kind of surface, in any way that you want. That sounds like an amazing prospect. Who wouldn’t want to be able to cut through difficult materials in tight or awkward spaces?

It is supposed to cut through marble, wood, metal, PVC, hardwood, plastic, carpet, ceramic tile, drywall, and even steel. One of the conveniences of a handheld saw is that it is exceptionally flexible in which space it can cut. Tight corners, for example, are no problem for a small handheld saw.

One of the other best uses of a small handheld saw is cutting out unique shapes or on a curved shaped. Materials such as ceramic tile and steel are especially challenging to cut in curves for those odd corners, rounded countertops, et cetera.

If you find a handheld saw that can do that, you’ve definitely found a unique tool that will come in handy for any non-standard design projects, or even for cutting through countertop for fitting in a rounded sink.

How Big is the Rotorazer?

The Rotorazer is twelve inches long, three inches wide, and weighs about four pounds. It’s a very small, compact, light-weight saw perfect for small projects and beginners, or for those with a bit less upper body strength than the burly men in most power tool commercials.

What are the Features and Accessories of the Rotorazer? 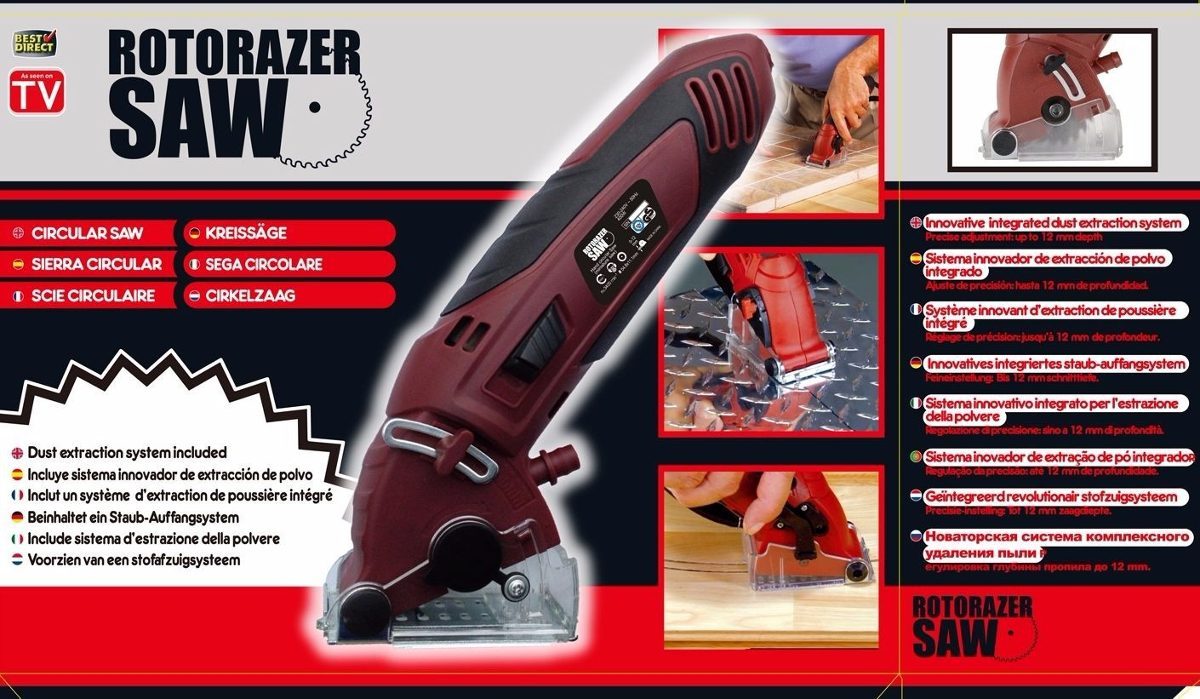 The Rotorazer has an adjustable blade guard that makes working at different depths doable. You can go up to a one-inch maximum depth with the Rotorazer. This feature should make it perfect for cutting through drywall without fear of cutting into wires in a wall that you need to repair.

It is supposed to be able to easily cut in any direction. Whether you’re cutting upside down for a shallow cut into a ceiling, horizontally up a wall, vertically along a board, or around a curve or in a corner, the Rotorazer is supposed to do it all with ease.

The Rotorazer comes with three heavy duty blades that are used for different kinds of projects. Each blade is 85 millimeters thick, and described as razor sharp.

The diamond blade is used for cutting through hard surfaces like stone, grout, tile, and masonry. This can be a unique challenge with most saws. Having an easy-to-use, small, handheld saw like the Rotorazer that can do it would make challenging materials much easier to work with. Generally speaking, this is your non-metal hard surfaces blade.

The steel blade is used for cutting through carpet, steel, and other metal surfaces. Whether you’re cutting a copper pipe, steel plate, or trimming carpet for a room that isn’t quite square, the steel blade is supposed to do it. Basically, this is your metal cutting blade.

The Rotorazer blades are easy to replace, as well. You can find extras on Amazon, or pretty much any other hardware retailer site that carries the Rotorazer saw itself. If you tend to do a lot of projects, and go through blades quickly, the easy to replace factor is a big bonus.

The Rotorazer also comes with a series of accessories, including:

The storage case should hold the saw and basic accessories in one secure, durable place.

The system is supposed to attach to any standard vacuum cleaner. This makes clean up much easier and safer throughout the process of any project. You simply attach the hose to your vacuum cleaner while you’re doing the work with the Rotorazer, and the dust extraction system sucks up the sawdust or metal dust. If attached properly, the hose should prevent you from ever having to sweep up the mess of your work project or get sawdust in your clothes.

3. A Parallel Fence or Guide Rail

The parallel fence is included for your convenience in guiding and directing this handheld saw through whatever material you’re working.

What do Consumers Think of the Rotorazer?

If the Rotorazer actually lives up to the promises of the manufacturers, this as-seen-on-television saw could be one of the handiest items in your tool shed. But it seems like it’s probably too good to be true. Let’s look at what real people think of this product.

Real users on Amazon give mixed reviews, though slightly more in favor of the Rotorazer than those opposed. 58 percent of the people who purchased this tool gave it five stars on Amazon, while seventeen percent gave it four stars. Twenty percent, however, gave it a single star, and several stated that they’re seeking refunds.

Overall comments on Amazon state that the Rotorazer does indeed cut right through metal and plywood like they’re nothing. It also cuts curves easily, which is unusual, and is versatile, as promised.

Others stated that the saw produces very little dust, also as promised, which is a huge bonus for anyone who’s doing much metal or woodwork and wants to avoid breathing in the particles. These consumers attached the hose, or dust extraction system, to a vacuum cleaner properly, and followed the instructions to achieve the desired results.

Consumers said that the it cuts easily through tile, even on a curve, and really does do all that the other saws do, but much easier, since the Rotorazer is handheld and easily maneuvered.

One review site gave a rather middle of the road response to the Rotorazer. They liked the versatility of the saw, but felt that it probably lives up to the reputation of most as-seen-on-television: flimsy and lower quality than standard brands. The review site also commented that the makers of the Rotorazer are notorious for poor customer service, and that’s a big drawback.

Some consumers did seem to complain that the saw was great for some projects, while thicker materials couldn’t be cut. It seems to be evident that the Rotorazer is designed for thinner materials, and not thick wood or tile, cement or other hard surfaces. Information throughout the Rotorazer materials indicate that the saw is not designed for deep cuts, however, so this criticism may be more on the users who didn’t understand the function of the saw.

One of the other negative comments on the Rotorazer is that the on and off doesn’t fully lock into place, meaning you could accidentally turn the saw off if you bumped it. This could potentially be a safety issue, so be sure to always unplug the Rotorazer when not in use. You should do this with all power tools anyway, but because of this feature issue, it’s particularly important with the Rotorazer.

What do We Think of the Rotorazer?

After all the reviews and research, we’ve come up with what we feel is a fairly comprehensive overview.

Some reviews have declared that they believe the Rotorazer is a great option for people who are just beginning to delve into the world of power tools. This makes sense, because it’s an easy to use, light-weight, handheld saw that does a lot of things. Most beginners won’t start out with major projects like cutting through thick cement.

The blades are easy to change out, as well, which is another feature that makes the Rotorazer a potentially great tool for a beginning power tool user.Because it is so easy to use, there’s a much higher probability of a beginner achieving accurate cuts. Not all projects require precision, but for those that do, a new DIY-er stands a greater chance of getting that accurate cut with a saw like the Rotorazer.

The Rotorazer is also a good tool for beginners because it is so versatile. Instead of a newbie needing to have four or five saws to start out, the Rotorazer functions as up to seven different types of saws, according to the manufacturers. That’s definitely a selling point for a beginner who doesn’t want to invest in a lot of tools to begin with.

Because the Rotorazer is versatile, small, easy to use, and easy to maneuver, it seems to be a great tool for quick projects around the home. Reviewers commented that the Rotorazer is most ideally used indoors on quick repair or minor construction projects.

Ultimately, we believe that the Rotorazer is a decent handheld saw. It cuts on a curve, in wood, tile, or other materials, which is pretty handy for a number of projects. And while it may not have the highest ratings of all time, it is still a pretty good tool.

Since the Rotorazer has such mixed reviews, we’d recommend ordering from a company with a better reputation than Ideal Living does, to make sure you’re able to get a refund or replacement, if needed.

That prospect isn’t ideal, but if you want a little handheld power saw that really does seem to cut through steel, PVC, hardwood, metal, and ceramic tile, you’re probably going to find it’s a tool worth having around.

There are two models of the Rotorazer. If you’re choosing to purchase one of them, we’d highly recommend going with the Platinum model over the standard, as it’s just a bit more powerful and has twice the cutting depth of the standard model. The minimal price difference is well worth it for the better model.

Of course, before making any purchase of any kind, we strongly recommend checking out the various reviews for yourself, from real users that have had different experiences with the Rotorazer. While we’ve gathered what we can, there are new reviews from users every day.

Some folks have been working in construction for years, and have a lot more knowledge than others. Be sure that the reviews you’re finalizing your purchase decision upon come from real people, who really know what they’re talking about.